A contest was presented to all Masons of Indiana by MWB Ishmael D. Ison, PGM.  Unexpectedly, designs came in from all over Indiana, so many that a committee had to be formed to choose the best design.  There were two most outstanding designs and during deliberations, an idea formed – combine the two designs. 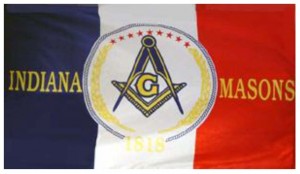 The Indiana Masonic Flag is made up of a Red, White, and Blue stripe running vertically. The Red is representative of Fidelity of Masons.  The White represents the Purity of all upright Masons.  The Blue represents the Blue Lodges of which we all belong.  The number 1818 refers to the date which our Grand Lodge was formed.  There is a Cable Tow that surrounds the Masonic Emblem (Square and Compass) which binds us all as Brothers.  The Sheaves of Wheat; that our members will always be plentiful.  The nine stars are rrepresentative of the nine original Lodges that formed our Grand Lodge.  The Masonic Emblem to remind us to square our actions  and keep ourselves within due bounds.  The letter “G” represents the one Almighty God that we all serve.  The words Indiana Masons is printed in Gold Lettering spanning the width of the Flag.